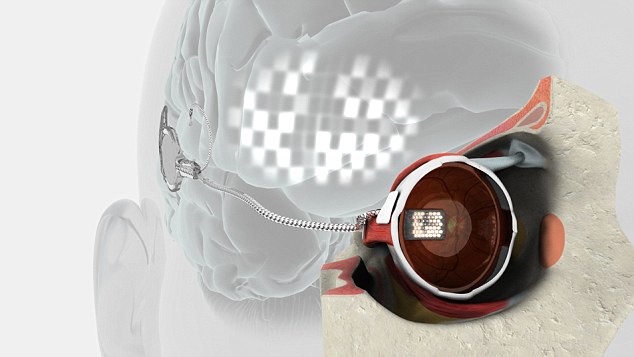 16 May Vision of the future

Posted at 13:13h in Uncategorized by admin

Vision of the future: The bionic eye that could help millions of blind to see again after woman had partial sight restored in pioneering tests

Dianne Ashworth, who has severe vision loss due to the inherited condition retinitis pigmentosa, was fitted with a prototype bionic eye in May at the Royal Victorian Eye and Ear Hospital.

It was switched on a month later, and today researchers revealed the results.

A prototype of the bionic eye created by Bionic Vision Australia (BVA), who said today they had successfully implanted the ‘world first’ bionic eye prototype

‘It was really funny when it switched on I was waiting, waiting,’ she said.

‘I had these goggles on and I didn’t know what to expect, and I don’t know if anyone did know what I was going to see.

‘Then all of a sudden I went ‘yep’ I could see a little flash and it was like a little, I suppose, a splinter.

‘There were different shapes and dark black, lines of dark black and white lines together.

‘Then that turned into splotches of black with white around them and cloud-like images.

‘I can remember when the first bigger image came I just went “Wow”, because I just didn’t expect it at all but it was amazing.’

The bionic eye, designed, built and tested by the Bionic Vision Australia, a consortium of researchers partially funded by the Australian government, is equipped with 24 electrodes with a small wire that extends from the back of the eye to a receptor attached behind the ear.

It is inserted into the choroidal space, the space next to the retina within the eye.

‘Electrical impulses are passed through the device, which then stimulate the retina.

Those impulses then pass back to the brain, creating the image.’
Read more: http://www.dailymail.co.uk/sciencetech/article-2195683/Bionic-eye-breakthrough-Australian-woman-receives-radical-world-implant.html#ixzz2TSdZgpVN